Alyson Rae Stoner (born August 11, 1993) is an American actress, dancer and singer. Stoner is known for her roles as Max in The Suite Life of Zack & Cody, Sarah Baker in Cheaper by the Dozen and Cheaper by the Dozen 2, Camille Cage in Step Up, Step Up 3D and Step Up All In and Caitlyn Gellar in Camp Rock and Camp Rock 2: The Final Jam. She has been a background dancer for several artists, such as Missy Elliott, Eminem, Outkast and Will Smith. Stoner is also known as Sally from Mike's Super Short Show that ran from 2002–2007, and the voice of Isabella Garcia-Shapiro in Phineas and Ferb. 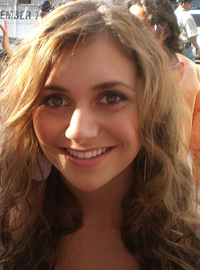 image credit
Alyson Stoner by Jennifer, is licensed under cc-by-sa-1.0, resized from the original.