Alfred Jarry (French: [ʒaʁi]; 8 September 1873 – 1 November 1907) was a French symbolist writer best known for coining the term and philosophical concept of 'pataphysics, "inspiring a century of experimentation".Born in Laval, Mayenne, France, not far from the border of Brittany; he was of Breton descent on his mother's side. In his lifetime, though associated with the Symbolist movement, Jarry was best known for his play Ubu Roi (1896), which is often cited as a forerunner to the Surrealist and Futurist movements of the 1920s and 1930s. Jarry wrote in a variety of hybrid genres and styles, prefiguring the Postmodern. He wrote plays, novels, poetry, essays and speculative journalism. His texts present us with pioneering work in the fields of absurdist literature and postmodern philosophy. 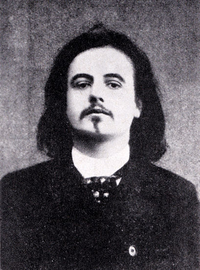