Alanis Nadine Morissette (born June 1, 1974) is a Canadian-American singer-songwriter, guitarist, record producer and actress. She has won 16 Juno Awards and seven Grammy Awards, was nominated for two Golden Globe Awards. Morissette began her career in Canada, and as a teenager recorded two dance-pop albums, Alanis and Now Is the Time, under MCA Records Canada. 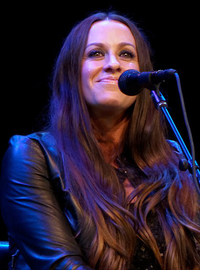 image credit
Alanis Morissette by Justin Higuchi, is licensed under cc-by-2.0, resized from the original.