Alaina Huffman (born April 17, 1980) is a Canadian film and television actress, also known professionally as Alaina Kalanj (her birth name).She is known for the Canadian television series Painkiller Jane, where she played the character Maureen Bowers. She also played Dinah Lance/Black Canary on Smallville, as well as 1st Lt. Tamara Johansen in Stargate Universe, where she was a regular cast member. She currently plays Abaddon in Supernatural. 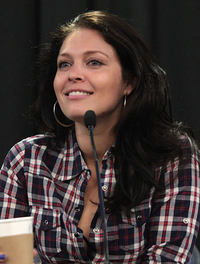 image credit
Alaina Huffman by Gage Skidmore, is licensed under cc-by-sa-3.0, resized from the original.