Agnetha Fältskog (Swedish pronunciation: [aŋˈneː.ˈta ˈfɛlt.ˈskuːɡ], born 5 April 1950) is a Swedish recording artist. She achieved success in Sweden after the release of her debut album Agnetha Fältskog in 1968, and reached international stardom as a member of the pop group ABBA, which has sold over 370 million albums and singles worldwide, making them one of the best–selling music artists in history and the second or third best–selling band in history.Since the break-up of ABBA, Fältskog has continued to have success as a solo artist, albeit interspersed by periods of relative recording inactivity. 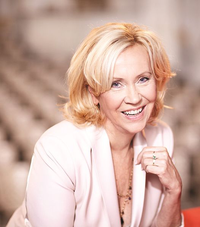 image credit
Agnetha Fltskog by Stockholm Pride, is licensed under cc-by-3.0, resized from the original.