Adriana Francesca Lima (Brazilian Portuguese: [ɐ̃dɾiˈɐnɐ frɐ̃ˈsɛskɐ ˈlimɐ]; born June 12, 1981) is a Brazilian model and actress who is best known as a Victoria's Secret Angel since 2000, and as a spokesmodel for Maybelline cosmetics from 2003 to 2009. At the age of 15, Lima finished first in Ford's "Supermodel of Brazil" competition, and took second place the following year in the Ford "Supermodel of the World" competition before signing with Elite Model Management in New York City. In 2012, she came in 4th on the Forbes top-earning models list, estimated to have earned $7.3 million in one year. 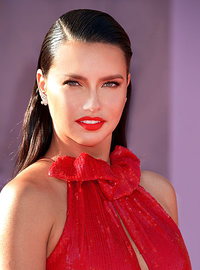 image credit
Adriana Lima by Glenn Francis, is licensed under cc-by-sa-4.0, resized from the original.