Adrian Kayvan Pasdar (/ˈpæzdɑr/; Persian pronunciation: [kejˈvɒːn pɒːsˈdɒːɾ]; born April 30, 1965) is an American actor, voice artist, and film director. He is known for playing Jim Profit on the TV series Profit, for his roles in Near Dark, Carlito's Way, Mysterious Ways and as Nathan Petrelli on Heroes. Additionally, he directed the feature film Cement. Pasdar is the voice of Iron Man in Marvel Anime, as well as in the animated series, Ultimate Spider-Man and Avengers Assemble. He also played Alec Rybak, district attorney on The Lying Game. 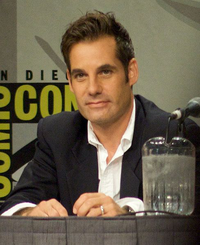 image credit
Adrian Pasdar by Ewen Roberts, is licensed under cc-by-2.0, resized from the original.