Adam Craig Gilchrist, AM (born 14 November 1971), nicknamed "Gilly" or "Churchy", is a former Australian cricketer who has captained Kings XI Punjab and Middlesex. He is an attacking left-handed batsman and record-breaking wicket-keeper, who redefined the role for the Australian national team through his aggressive batting. He is considered to be one of the greatest wicket-keeper–batsmen in the history of the game. In March 2013, he announced that he would join the Caribbean Premier League, a Twenty20 tournament in the West Indies in July along with teammate Ricky Ponting. 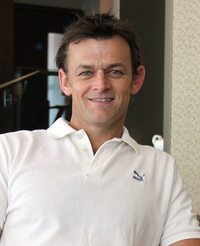 image credit
Adam Gilchrist by Luton Anderson, is licensed under cc-by-sa-2.0, resized from the original.