Arian Asllani (born December 2, 1983), better known by his stage name Action Bronson, is an American rapper from Flushing, Queens, New York. He is signed to Vice Records and Atlantic Records. He has released various mixtapes such as the critically acclaimed Rare Chandeliers, with The Alchemist, before releasing his major-label debut, an EP titled Saaab Stories, with frequent collaborator Harry Fraud, in 2013. He is currently working on his major-label debut studio album. 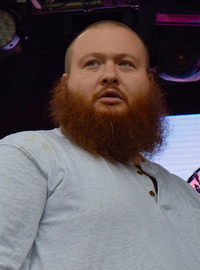 image credit
Action Bronson by Jordan Uhl, is licensed under cc-by-2.0, resized from the original.