Achraf Hakimi Mouh (Arabic: أشرف حكيمي موح; born 4 November 1998) is a Moroccan professional footballer who plays for French Ligue 1 club Paris Saint-Germain and the Morocco national team. He mainly plays as a right-back, although he occasionally also plays as an attacking full-back. Hakimi came through Real Madrid's youth academy. He began playing for Real Madrid Castilla in 2016 and was promoted to the first-team in 2017, playing a few minutes with the latter. He was sent on a two-year loan deal to Bundesliga side Borussia Dortmund, winning the DFL-Supercup in 2019. After a successful loan with Dortmund, Hakimi signed with Serie A side Inter Milan for a reported fee of €40 million, with his performances helping the club win the league title, ending the club's eleven-year league title drought. His performances sparked the interest of several European clubs, with Paris Saint-Germain signing him in 2021 for a reported fee of €60 million. Born in Spain to parents from Morocco, Hakimi represented Morocco at various youth levels, before making his international debut in 2016 aged 17, after previously being capped by the nations' youth teams at under-20. He was chosen in Morocco's squads for the FIFA World Cup in 2018 and the Africa Cup of Nations in 2019 and 2021. 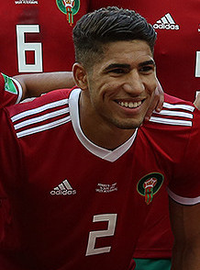 image credit
Achraf Hakimi by Кирилл Венедиктов, is licensed under cc-by-sa-3.0, resized from the original.