How to read your synastry chart

This article explains how to read a synastry chart. To first gain a foundation in astrology (such as the significance of the aspects and planets) take a look at How to read your astrology chart.

A synastry chart overlaps two birth charts and then examines the aspects between the two charts to reflect the character and dynamic of the relationship. Let's explore synastry through one of the most famous relationships in the world: Beyonce and Jay-Z, or more aptly know by people younger as Bey-Z. Or, you can follow along with a Synastry chart of you own choosing - which you can easily make with our free synastry chart tool.

We can see their individual birth charts have been overlaid on top of one another, as this is good vantage to visualize the aspects between their charts. Below the chart is a list of all their individual planets. 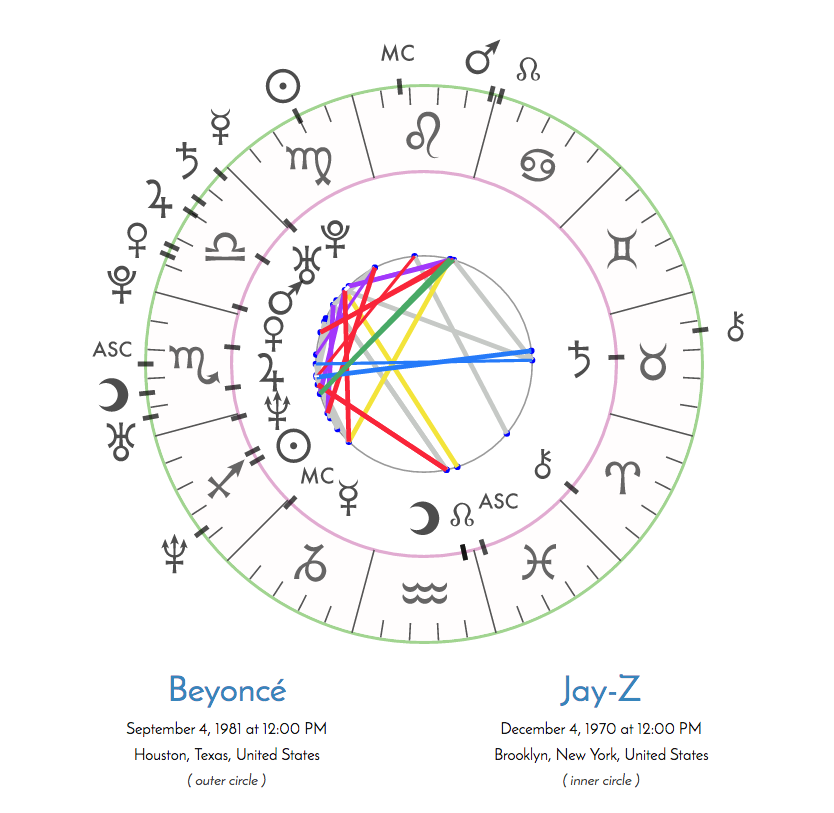 If we scroll to see their Synastry aspects we can see the angles created between Beyonce and Jay-Z's individual planets. Aspects can look jarring with their astrological jargon. Don’t get me wrong - reading "North Node Sextile Pluto, orb zero degrees” would raise most people's eyebrows. But, let's explore one aspect so that you’ll see it’s actually quite easy to grasp.

The first aspect on the list North Node Sextile Pluto orb 0 Deg means Beyonce’s North Node is a 60 deg angle to Jay-Z’s Pluto. Sextile indicates that the angle formed between two points between each other’s individual horoscope points is 60 degrees.

What does the mystical word “orb” mean? An orb is the "error margin" of an aspect. For example, looking at Bey-Z’s aspect we can see there’s a Mercury Square Mercury orb: 1 °. This means that their Mercury’s are not a perfect square, but is off by 1 degree.

Below is a table listing all the major aspects. It also lists their degree, their symbol and their influence.

What can Synastry tell us about our relationships?

Before we get into the fun stuff - interpreting aspects. Let me share my view on what Synastry can tell us about our relationships.

An astrologically sound relationship does not always translate, in reality, into being the perfect relationship. Ultimately there are a multitude of variables that exist when two people choose to come together. You carry your past experiences, social background, education which when mingled with someone else’s life baggage can result in an endless amount of outcomes. The benefit of Synastry is showcasing another perspective of your relationship, showcasing the individual qualities you both bring into the relationship and the potential your relationship possesses. At the end of the day, the future of your relationship is not determined by the stars above, it always was and always will be determined by you.

Yay! Now the part I enjoy the most, let's try our hand at interpreting some aspects. The basics of interpretations in Synastry is pairing the planetary energies with how they’ll play with the influence of the aspect. So let's explore the Sun Square Sun aspect.

I like to begin by writing some basic points about the particular planetary energies in the aspect, in this case it’s the Sun. Let's paint the basic Sun energies:

Now we can see the aspect is a “square”, many astrologers like to paint that a square is an ominous force, a destroyer of relationships, they love to drum it up as being something that’s akin to the sky falling down. I take a lighter approach in looking at squares. I see it as a very powerful aspect, I see squares as an obstacle to overcome, and it's the beauty of overcoming that is infinitely beneficial to any relationship. As it signifies growth and the learning of invaluable wisdoms.

So, with the presence of both Beyonce’s Sun and Jay-Z’s Sun, this from the get go symbolizes a bright self expressive relationship. Also as the sun represents our mode of self-expression, and where we seek to shine, we can see their matching Sun signs give them a mutual love of music and entertainment.

We can say there’s almost like an instant rapport between them, and an energy that allows their personas to just “click” around each other. It’s not something they can easily explain. They likely felt like old friends, right from the get go. They simply enjoy being in each other's presence - a bright, enduring energy can be felt.

Understandably there’s a natural competitive nature between them, which the square aspect may exaggerate. This pursuit to win superficially may seem ego driven, but when approached positively it symbiotically motivates them both to become their highest selves. This is evident in their music careers, they have propelled each other from being just music stars to entrepreneurial media moguls.

The square energy at times can be very strong to deal with. So in the case of Bey-Z, when their relationship feels this effect, we see how their relationship can become very withdrawn from the public eye. Their personal expression with each other becomes very private, throwing gossip magazines around the world into a frenzy as they wildly speculate the details.

In fact, when their energy is flowing harmoniously, they feel an ego boost around one another. They feel impelled to express themselves fully or gain mastery in a chosen interest, rather than remaining complacent and resting on their laurels. Sharing this similar approach to life creates an environments of mutual respect, encouragement and desire for growth around one another.

Energy out of balance could amplify their competitive nature, bringing about comparison rather than encouragement. Scuffles between them can take on a dramatic, larger than life feel. Which by the nature of their fame, any drama that flares up between them, naturally becomes world-wide news.

At the end of the day

Have fun with Synastry and keep it playful. Don’t let it unfairly paint how you view your partner. I tell people to treat it like a supplement for your relationship. If you enjoyed this and would like a full interpretation report for you synastry chart, click here.