How to read your astrology chart

The chart captures the position of the planets in the zodiac at the time of your birth. You might remember from an astronomy class that the earth is surrounded by the "Celestial Sphere", a beautiful globe of stars that appear to mainly stay put from millennium to millennium.

The zodiac compromises of a narrow band of stars within this Celestial Sphere, that fall on the plane of our solar system. You may remember that all the planets in our solar system circle the sun on roughly the same horizontal plane. From our vantage point on earth, they always appear to travel through the same stars, which we've named the zodiac.

The zodiac has been divided into 12 constellations of varying shapes and sizes. The constellation Aries is quite small, where is Virgo is considerably larger. For this reason it can be assumed the constellation areas were likely meant to be considered symbolically rather than literally.

The number 12 is quite magical. 12 points around a circle can be connected by triangles or squares, a pentagram, and star shapes. Astrology had its beginning with the Babylonians in the second millennium B.C. who created the foundation of the 12 constellations and astrology as we know it today.

Every planet, sign, and relationship in astrology (such as an aspect) has a symbolic meaning. Skilled astrologers vary greatly in their interpretations, but agree on some core principles. What is exciting about astrology is own our room for interpretation of what we see. Is what we know only at the tip of an iceberg? Can the movements of the planets describe movements of subtle energy in our lives and on our planet?

The signs are the 12 constellations that make up the zodiac. You can the signs as unique energies through which the symbology of the planets filter. 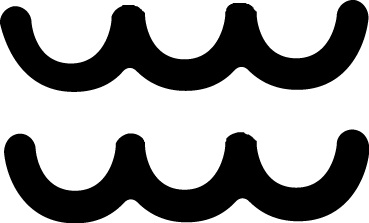 In astrology, the planets refer to the positions of the fast moving Sun, Moon, Mercury, Venus, Mars and slow moving Jupiter, Saturn, Neptune, Uranus, and Pluto. Many charts now also include Chiron, as asteroid thought to represent one's wounding, and the North Node, thought to represent a more spiritual view of one's life path (in comparison to the Sun).

You may also see the angles listed: Ascendant, MC, IC, Descendant. The Asc shows the sign that was rising on the horizon at the moment of the chart. It varies greatly by hour and minute. The Descendant is exactly opposite of the Ascendant and shows the sign falling on the horizon. The MC is the point at which meridian intersects with the zodiac, and the IC the point directly across. Use the below as a legend for the symbols on the chart.

MC
North Node
It is optional to include other asteroids such as :

Each planet falls along the 360 degree circle in one of the 12 constellations. Each constellation has 30 degrees within it. So a planet's position can be described with a line like "3 deg Aries" indicating that counter clockwise from the start of the sign Aries, the planet is located 3 degrees in. Sometimes there is a minute listed as each degree can be divided into 60 minutes. However this detail often means very little in respect to the aspects or interpretation of your chart.

Each planet creates a geometric relationship to each other planet within the circle. When this relationship is special - for instance the angle formed between them is 90 degrees and thus looks like the corner of a square, this is noted by astrologers and interpreted.

The primary aspects to look at are the conjunction, square, trine, opposition, and sextile. The others are less common to interpret and examine but many are still included in astro-charts as they may be of interest to you.

Septile Angle: 51° Orb typically: 1° (angle when the circle is divided into 7 parts)

Octile Angle: 45° Orb typically: 1° (angle when the circle is divided into 8 parts)

Quintile Angle: 72° Orb typically: 1° (angle when the circle is divided into 5 parts)

The orb listed in the legend is the "error margin" of the aspect. For instance, a Sun at 15° Aries and a Moon at 15° Capricorn form a perfect 90° angle, and thus a perfect square. It is not common to see such a "tight" square in a chart.

It is not uncommon however to visually see a square in your chart, however. It may be off somewhat by a few degrees, such as a Sun at 10° Aries and a Moon at 16° Capricorn. The number of degrees by which the angle is "off" is the orb. In the example given, the orb is 6 degrees. Astrologers use an orb to determine which relationships they want to count as squares and which ones they don't.

How we calculate Orbs on Astro-Charts

In addition to using the orbs above, we also cap orbs between the outer planets Saturn, Uranus, Neptune, and Pluto at 3 degrees. These planets move so slowly, they can remain in close aspect with one another for years, and thus define a generation. We also cap all orbs between the Asteroids, the MC, and the North Node at 4 degrees. These are considered more minor points, so we only look at the 'tight' aspects.

Sometimes a cluster of aspects form a larger pattern or shape. These unique aspect patterns have their own interpretations. They are listed below:

Multiple Planet Square
This aspect occurs when a group of planets cluster at one or both ends of a single square aspect.

Multiple Planet Opposition
This aspect occurs when a group of planets cluster at one or both end of a single opposition.

T-Square
A T-Square is made of a minimum of three planets and two square aspects, forming a T.

Grand Cross
A Grand Cross is made of a minimum of four planets, all square to one another, in addition to two oppositions between the corners of the square.

Grand Trine
A Grand Trine is made of three trine aspects, forming a triangle with 60 ° angles.

Kite
A Kite is one Grand Trine with a planet at the midpoint of one its sides. This midpoint planet forms two sextiles to its endpoints.

Castle
A Castle is composed of a Grand Trine with two planets at the midpoint of two of its sides. The two planets form two sextiles with its endpoints.

Star of David
A Star of David can be seen as Grand Trine with three planets at the midpoint of all three of its sides. It can also be seen as three Kites overlapping. It is composed of a minimum of six planets, all sextile to one another.

Rectangle
A rectangle, also known as a Mystic Rectangle, is formed by two oppositions and two sextiles and two trines. Two planets must be in opposition and have a planet which sextiles them and forms a trine with their opposing planet.

Yod
A Yod is formed from two planets in sextile which both quincunx a third planet. It looks like an arrow, as if one planet is being pointed to.

Stellium
A Stellium is formed when a cluster of planets are conjunct or nearly conjunct.

Cradle
A Cradle is formed by three sextiles spread over one side of the chart. The first and last planet in the sequence form an opposition.