Merced Solis (born May 10, 1953 in Mission, Texas), better known by his ring name Tito Santana, is a Mexican-American professional wrestler whose heyday spanned from the late 1970s to the early 1990s, though he continues to appear on the independent circuit. He is best known from his time in the World Wrestling Federation where he competed almost exclusively from 1979 to 1993 (missing part of 1980 and returning in `83). Solis was twice WWF Intercontinental Champion and twice co-holder of the WWF Tag Team Championship and helped bridge the gap between the 1980s "Rock 'n Wrestling Connection" era to the 1990s "New Generation" era.During his time in the WWF, Santana, despite being born and raised in Texas, was billed as hailing from the Mexican town of Tocula. Tocula is actually the town of Toluca, Mexico. 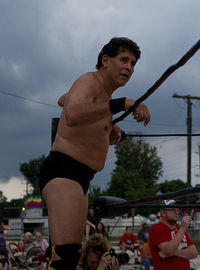 image credit
Tito Santana by Tabercil, is licensed under cc-by-sa-3.0, resized from the original.