Thomas Alexander Dekker (born December 28, 1987) is an American film and television actor and a musician. He is also a singer and has written and produced two albums.He is best known for his roles as John Connor in Terminator: The Sarah Connor Chronicles, Nick Szalinski on Honey, I Shrunk the Kids: The TV Show, and Zach on Heroes. He also did the voice of Littlefoot in The Land Before Time V-IX (singing voice in The Land Before Time V) and as Fievel Mousekewitz in An American Tail: The Treasure of Manhattan Island and An American Tail: The Mystery of the Night Monster. He is also known for playing Jesse Braun in the 2010 remake of A Nightmare on Elm Street, and recently, Smith in Gregg Araki's film Kaboom. Dekker most recently starred as Adam Conant on The CW series The Secret Circle. 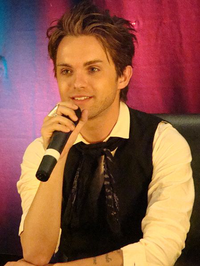 image credit
Thomas Dekker (actor) by vagueonthehow, is licensed under cc-by-2.0, resized from the original.