Supriya Pathak Kapur (born 7 January 1961) is an Indian actress, born to actress Dina Pathak into an ethnic of Gujarati family, she was one of the famous influential actresses, in Hindi Cinema, during the 1980s and 1990s, receiving two Filmfare Awards. In the early time of her life, she acted in theatre, before making her debut in 1981 Kalyug, which she won her first Filmfare Awards for Best supporting Actress. Later, rose to prominence and received critical reviews for her role in 1982 Bazaar, which she again won a Filmfare Awards for Best supporting Actress. 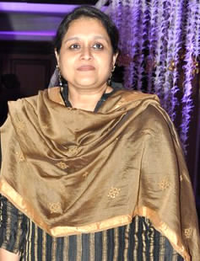 image credit
Supriya Pathak by http://www.bollywoodhungama.com, is licensed under cc-by-3.0, resized from the original.