Sterling Walter Hayden (born Sterling Relyea Walter; March 26, 1916 – May 23, 1986) was an American actor and author. For most of his career as a leading man, he specialized in westerns and film noir, such as Johnny Guitar, The Asphalt Jungle and The Killing. Later on he became noted as a character actor for such roles as Gen. Jack D. Ripper in Dr. Strangelove or: How I Learned to Stop Worrying and Love the Bomb (1964). He also played the Irish-American policeman, Captain McCluskey, in Francis Ford Coppola's The Godfather in 1972, and the novelist Roger Wade in 1973's The Long Goodbye. He played the role of Leo Dalcò in Bernardo Bertolucci's 1900 in 1976. At six feet five inches (196 cm), he was taller than most actors. 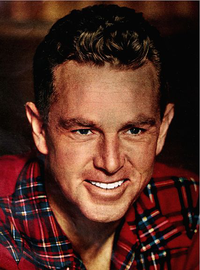