Ross Shor Lynch (born December 29, 1995) is an American television actor, singer, dancer, and musician. He is one of the founding members of the pop rock band R5, formed with his brothers Riker and Rocky, sister Rydel, and family friend/drummer Ellington Ratliff. He is best known for his debut role as Austin Moon on the Disney Channel original series Austin & Ally. In July 2013, he starred as Brady in the Disney Channel Original Movie Teen Beach Movie. 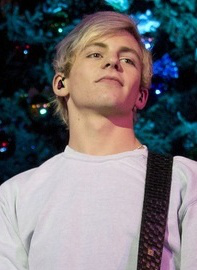 image credit
Ross Lynch by Ana Rivas, is licensed under cc-by-sa-2.0, resized from the original.