Raúl Albiol Tortajada (Spanish: [raˈul alˈβjol tortaˈxaða], Valencian: [raˈuɫ aɫβiˈɔɫ toɾtaˈdʒaða]; born 4 September 1985) is a Spanish professional footballer who plays for S.S.C. Napoli in Italy, and the Spanish national team.His main asset is his versatility, as he can play as a central defender, right back or defensive midfielder. He spent most of his career with Valencia and Real Madrid, winning five major titles with both teams combined; over the course of ten seasons he amassed La Liga totals of 229 games and seven goals.A Spanish international since 2007, Albiol represented the country at the 2010 World Cup and two European Championships. 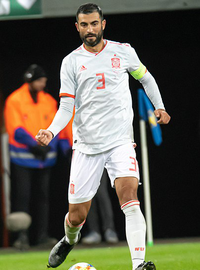 image credit
Ral Albiol by Rolandhino1, is licensed under cc-by-sa-4.0, resized from the original.