Rachel Anne McAdams (born November 17, 1978) is a Canadian actress. After graduating from a four-year theatre program at York University in 2001, McAdams initially worked in Canadian television and film productions such as My Name Is Tanino, Perfect Pie (for which she received a Genie Award nomination) and Slings and Arrows (for which she won a Gemini Award). Her first Hollywood film was the 2002 comedy The Hot Chick. She has three films awaiting release: Anton Corbijn's espionage thriller A Most Wanted Man, Wim Wenders's drama Every Thing Will Be Fine and Cameron Crowe's untitled Hawaii romantic comedy project. 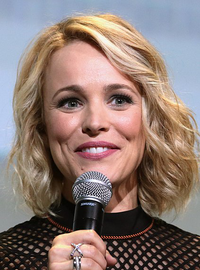 image credit
Rachel McAdams by Gage Skidmore, is licensed under cc-by-sa-2.0, resized from the original.