Sir Peter Alexander Ustinov, CBE (/ˈjuːstɪnɒf/ or /ˈuːstɪnɒf/; 16 April 1921 – 28 March 2004) was an English actor, writer and dramatist. He was also renowned as a filmmaker, theatre and opera director, stage designer, author, screenwriter, comedian, humorist, newspaper and magazine columnist, radio broadcaster and television presenter. A noted wit and raconteur, he was a fixture on television talk shows and lecture circuits for much of his career. In 2003 Durham University changed the name of its Graduate Society to Ustinov College in honour of the significant contributions Ustinov had made as chancellor of the university from 1992 until his death. 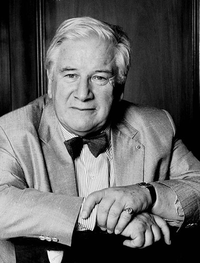 image credit
Peter Ustinov by Allan warren, is licensed under cc-by-sa-3.0, resized from the original.