Peter William "Pete" Postlethwaite OBE (/ˈpɒsəlθweɪt/; 7 February 1946 – 2 January 2011) was an English actor. After minor television appearances, including in The Professionals, his first success came with the 1988 film Distant Voices, Still Lives. He played a mysterious lawyer, Mr. Kobayashi, in The Usual Suspects, and appeared in Alien 3, Amistad, Brassed Off, The Shipping News, The Constant Gardener, The Age of Stupid, The Lost World: Jurassic Park, Romeo + Juliet, and Inception. 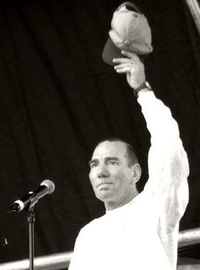 image credit
Pete Postlethwaite by Dave Morris, is licensed under cc-by-2.0, resized from the original.