Joseph McGinty "McG" Nichol (born August 9, 1968), is an American film director, film and television producer, and former record producer.He began his career in the music industry, directing music videos and producing various albums. He later rose to prominence with his first film, Charlie's Angels, which had the highest-grossing opening weekend for a directorial debut at the time. Since then, he has directed four other films, including Charlie's Angels sequel Charlie's Angels: Full Throttle and Terminator Salvation, co-created the cult television series Fastlane and has executive produced numerous television programs, such as The O.C., Chuck, and Supernatural.McG also owns a production company, Wonderland Sound and Vision, founded in 2001, which has overseen the production of the films and television shows he has worked on since Charlie's Angels: Full Throttle. 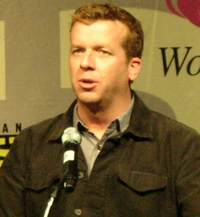 image credit
McG by BrokenSphere / Wikimedia, is licensed under cc-by-sa-3.0, resized from the original.