Marla Gibbs (born Margaret Theresa Bradley; June 14, 1931) is an American actress, comedian, singer, writer and producer, whose career spans five decades. Gibbs is known for her role as Louise and George Jefferson's maid, Florence Johnston, in the long-running CBS sitcom, The Jeffersons (1975–85), for which she received five nominations for Primetime Emmy Award for Outstanding Supporting Actress in a Comedy Series. She also starred in the show's spin-off Checking In (1981), and for her leading role as Mary Jenkins in the NBC sitcom, 227 (1985–90), which she also co-produced and sang on the theme song. Gibbs has won a total of seven NAACP Image Awards. In later years, Gibbs played supporting roles in films The Meteor Man (1993), Lost & Found (1999), The Visit (2000), The Brothers (2001), and Madea's Witness Protection (2012). 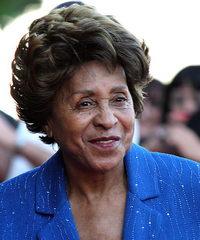 image credit
Marla Gibbs by bekahjan, is licensed under cc-by-2.0, resized from the original.