Manoj Bajpai (born 23 April 1969), also credited as Manoj Bajpayee, is an Indian film actor, works predominantly in Bollywood and few Telugu films. He has received praise from many critics for his acting performances in Indian Cinema, most notably for his roles as dacoit Maan Singh in Bandit Queen, Raghavan in Aks, Bhiku Mahatre in Satya, Rasheed in Pinjar, and Sardar Khan in Gangs of Wasseypur. His work has been recognised by several Filmfare awards as well as multiple National Film Awards . 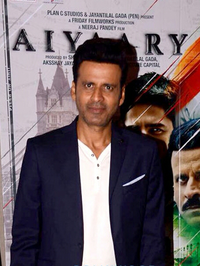 image credit
Manoj Bajpai by Bollywood Hungama, is licensed under cc-by-3.0, resized from the original.