Lars Ulrich (/ˈʌlrɪk/ UL-rik; Danish: [lɑːs ˈulˀʁæɡ̊]; born December 26, 1963) is a Danish-American drummer and one of the founding members of American heavy metal band Metallica. He was born in Gentofte, Denmark to an upper-middle-class family. A tennis player in his youth (he is the son of former tennis pro Torben Ulrich), Ulrich moved to Los Angeles, California at age sixteen in the summer of 1980 to pursue his training; though rather than playing tennis, he began playing the drums. After publishing an advertisement in a local Los Angeles newspaper called The Recycler, Ulrich met James Hetfield and formed Metallica. 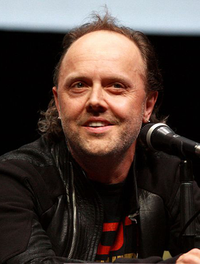 image credit
Lars Ulrich by George Skidmore, is licensed under cc-by-sa-2.0, resized from the original.