Jacqueline Marie "Jackie" Evancho (/iːˈveɪŋkoʊ/ ee-VAYNG-koh; born April 9, 2000) is an American classical crossover singer who gained wide recognition at an early age and, since 2009, has issued five albums, including a platinum and gold album and three Billboard 200 top 10 debuts.Between 2008 and 2010, Evancho entered several talent competitions; made singing appearances, mostly in Pennsylvania (including singing the U.S. Evancho appeared in the 2013 Robert Redford film The Company You Keep, has modelled for Guess Kids clothing, among others, and has appeared on behalf of such charities as One Drop Foundation. 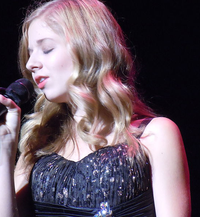