Heath Miller (born July 15, 1983) is an American professional wrestler currently signed to WWE as Heath Slater.Miller trained at WWA4 wrestling school in Atlanta,Georgia . After signing a developmental contract with WWE in 2006, Slater was a contestant in the first season of WWE NXT in 2010, where he finished fourth. He is a former three-time WWE Tag Team Champion. All three of his tag title reigns have been with his Nexus and Corre ally, Justin Gabriel. Since 2012, Slater has been primarily featured in WWE programming as the leader of the Three Man Band faction. 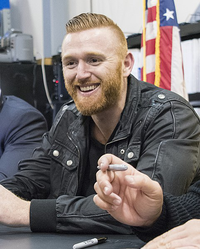 image credit
Heath Slater by Chairman of the Joint, is licensed under cc-by-2.0, resized from the original.