Geddy Lee Weinrib (born Gary Lee Weinrib, July 29, 1953), known professionally as Geddy Lee, is a Canadian musician and songwriter, best known as the lead vocalist, bassist, and keyboardist for the Canadian rock group Rush. Lee joined what would become Rush in September 1968, at the request of his childhood friend Alex Lifeson, replacing original bassist and frontman Jeff Jones. In addition to his composing, arranging, and performing duties for Rush, Lee has produced for various other bands, including Rocket Science. 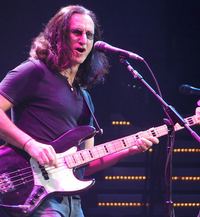 image credit
Geddy Lee by MATT BECKER, is licensed under cc-by-3.0, resized from the original.