Gabrielle Monique Union (born October 29, 1972)[citation needed]is an American actress and former model. Among her notable roles is her performance of the cheerleader opposite Kirsten Dunst in the film Bring It On, (2000). In 2000, she played a medical doctor in the CBS drama series City of Angels. In 2003, Union starred opposite Will Smith and Martin Lawrence in the blockbuster film Bad Boys II. Also in 2003, she starred with LL Cool J in Deliver Us from Eva. In 2008, she featured in the film Cadillac Records with Adrien Brody, Beyoncé Knowles and Jeffrey Wright. In 2012, Union featured in an ensemble cast of the film version of Think Like a Man. 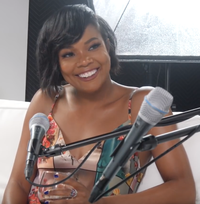 image credit
Gabrielle Union by Ashley Graham, is licensed under cc-by-3.0, resized from the original.