Édgar Filiberto Ramírez Arellano (Spanish pronunciation: [ˈeðɣar raˈmiɾes]; born 25 March 1977) is a Venezuelan actor. He played Carlos in the 2010 French-German biopic series Carlos, a role for which he won the César Award for Most Promising Actor at the César Awards 2011. He also played Larry, a CIA operative in Pakistan, in the film Zero Dark Thirty, and Paz, a CIA assassin, in The Bourne Ultimatum. Ramírez won at the 2012 ALMA Awards for Ares in Wrath of the Titans. He was nominated for a Golden Globe and Emmy Award.Ramírez studied communications at the Andrés Bello Catholic University. He then worked in media and considered becoming a diplomat. When Iñárritu (a short film he had made with friends) was critically praised, he decided to pursue his performing hobby as a career. 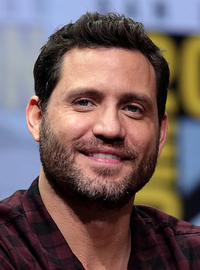 image credit
dgar Ramrez by Gage Skidmore, is licensed under cc-by-sa-3.0, resized from the original.