Doug Jones (born May 24, 1960) is an American former contortionist and actor best known to science fiction, fantasy, and horror fans for his various roles playing non-human characters, often in heavy makeup, in films and television series such as Hocus Pocus, Buffy the Vampire Slayer, Hellboy and its sequel Hellboy II: The Golden Army, Pan's Labyrinth, Falling Skies and Fantastic Four: Rise of the Silver Surfer. 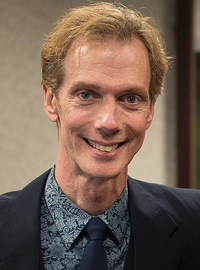 image credit
Doug Jones (actor) by Judson University, is licensed under cc-by-2.0, resized from the original.