Corbin Bleu Reivers (born February 21, 1989), known professionally as Corbin Bleu, is an American actor, model, dancer, producer and singer-songwriter of Jamaican-Italian heritage. He performed in the High School Musical film series, the Discovery Kids drama series Flight 29 Down, and the Disney Channel Original Movie Jump In!. His first lead role was in the film Catch That Kid (2004). Corbin and his partner made it to the finals, but became the runner-ups behind Amber Riley. 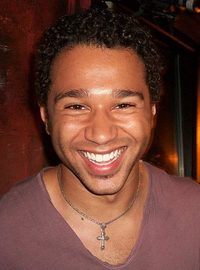 image credit
Corbin Bleu by Damon Jamal Gillespie, is licensed under cc-by-sa-3.0, resized from the original.