Chyna (born Joan Marie Laurer; December 27, 1970) is an American former professional wrestler, actress, bodybuilder, and pornographic film actress.Chyna first rose to prominence upon debuting in the professional wrestling promotion the World Wrestling Federation (WWF) in 1997, where she performed under the ring name Chyna and was billed as the "Ninth Wonder of the World" (André the Giant was already billed as the eighth). A member of the stable D-Generation X, she held the WWF Intercontinental Championship (the first female wrestler to do so) and WWF Women's Championship, and was the first female wrestler to participate in the Royal Rumble and King of the Ring events. It was released in 2004 and entitled 1 Night in China. 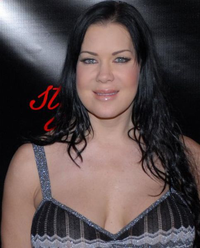 image credit
Chyna by Photo from www.lukeford.net, is licensed under cc-by-sa-2.5, resized from the original.