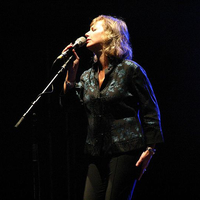 image credit
Christine Collister by Brian Marks, is licensed under cc-by-2.0, resized from the original.
Christine Collister (born 28 December 1961) is a Manx folk, blues and jazz singer-songwriter. She was born and grew up on the Isle of Man and first came to public attention in 1986 as the singer of the theme song for the BBC's television adaptation of Fay Weldon's book The Life and Loves of a She-Devil. Prior to this, in 1985 she became a permanent member of the Richard Thompson Band, serving both as a backing vocalist, and also singing with Thompson on many songs which had been previously performed as duets with ex-wife and former collaborator Linda Thompson. Over a period of four years, Collister took in several world tours with Thompson, after which came seven years working and romantic involvement with singer, songwriter and guitar player, Clive Gregson. During this period, the couple released five albums, starting with their first and most successful album, Home and Away. After being unavailable for some years, all were re-released on CD around 2010. Collister has released several solo albums since 1994, including Live, Blue Aconite, Dark Gift of Time and the compilation cd Songbird all for Fledgling Records, and An Equal Love and Into The Light for Topic Records.She has worked with the Isle of Man-based Stereo Scout Records, part of the Running Media Management Group, with whom she recorded a live album entitled Home in 2004, and her 20th Anniversary DVD entitled XX in 2005. In between these highly acclaimed projects, Collister also produced a vinyl cut for award winning hi-fi manufacturer REGA, entitled Love. The project was a collection of mainly cover songs, including tracks by Jim Croce, Kate Bush and Joni Mitchell, as well as her own interpretation of the Leonard Cohen song, "Hallelujah". Collister has toured and recorded with the all-female group Daphne’s Flight, the vocal ensemble Hell Bent Heaven Bound and Dave Kelly with the "Travelling Gentlemen", with live recordings of all these collaborations still available.In 2008 apart from further touring in the UK with Kelly and "the TG's", Collister also spent time writing and recording songs for her next album which was due for release in 2009. Collister moved from the UK, back to the island of her birth. She continues to write her own material and in 2011 was touring with Dave Kelly and Peter Filleul (ex Climax Blues Band) on piano and third harmony.