Ashley Graham (born 1987) is an American plus-size model from Lincoln, Nebraska. She is best known as a lingerie model for the plus-size clothing store Lane Bryant. She has appeared on the cover of Elle Quebec. Graham appeared in fashion magazines such as Vogue, Harper's Bazaar, Glamour and Latina. In addition, she appeared in several Levi's campaigns. Graham has appeared on the Tonight Show with Jay Leno, Entertainment Tonight, and CBS News and was interviewed by NPR about plus-size modeling. 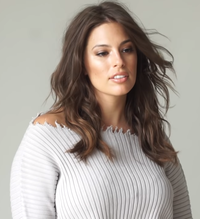 image credit
Ashley Graham (model) by Ashley Graham, is licensed under cc-by-3.0, resized from the original.