Anneke van Giersbergen (born 8 March 1973) is a Dutch singer, musician and songwriter. She is the former lead singer and guitarist of the Dutch progressive/alternative rock band The Gathering, which she departed in August 2007. Since then, she has been involved in a solo project called Agua de Annique, which also included her husband & drummer of the band, Rob Snijders. She now performs under her own name with her husband & other members.She has also frequently collaborated with other artists, including Ayreon, Devin Townsend, Within Temptation, and Globus amongst others (see discography). She has a mezzo-soprano vocal range. 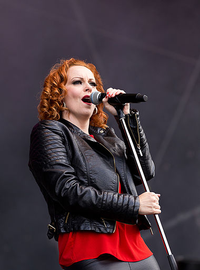 image credit
Anneke van Giersbergen by S. Bollmann, is licensed under cc-by-sa-4.0, resized from the original.