Amelia Platts Boynton Robinson (August 18, 1911 – August 26, 2015) was an American activist who was a leader of the American Civil Rights Movement in Selma, Alabama and a key figure in the 1965 Selma to Montgomery marches. In 1984, she became founding Vice-President of the Schiller Institute affiliated with Lyndon LaRouche. She was awarded the Martin Luther King, Jr., Freedom Medal in 1990. In 2014, actress Lorraine Toussaint played Robinson in the Ava DuVernay film Selma. 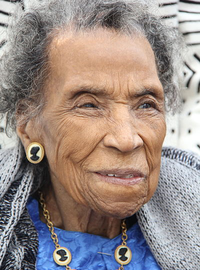 image credit
Amelia Boynton Robinson by Ianbailey1983, is licensed under cc-by-sa-4.0, resized from the original.