Serj Tankian (Armenian: Սերժ Թանգեան [ˈsɛɾʒ tʰɑnˈkjɑn]; born August 21, 1967) is a Lebanese-born Armenian American singer-songwriter, composer, multi-instrumentalist, record producer, poet, and political activist. He is best known as the lead vocalist, songwriter, keyboardist and occasional live rhythm guitarist of the metal band System of a Down.During his musical career, Tankian has released five albums with System of a Down, one with Arto Tunçboyacıyan (Serart), as well as five solo albums Elect the Dead, Imperfect Harmonies, Harakiri, Orca, and Jazz-Iz-Christ. 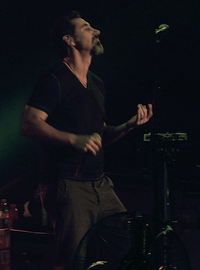 image credit
Serj Tankian by Chatsam, is licensed under cc-by-sa-3.0, resized from the original.