Natalia Alexandra Gutiérrez Batista (born December 10, 1986), better known by her stage name Natti Natasha, is a Dominican singer and songwriter. She was signed to Don Omar's label Orfanato Music Group. Her debut EP, All About Me, was released on March 28, 2012, by Orfanato Music Group. Her debut album, Iluminatti, was released on February 15, 2019, by Pina Records and Sony Music Latin. 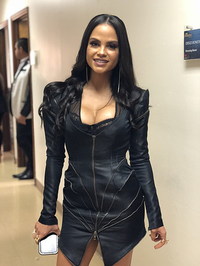 image credit
Natti Natasha by Cmoro005, is licensed under cc-by-sa-4.0, resized from the original.