Mohammad Azharuddin About this sound pronunciation (born 8 February 1963) is an Indian politician and former cricketer. He was an accomplished batsman and captained the Indian cricket team for much of the 1990s and an Arjuna Award winner in 1986.A member of the Indian National Congress, Azharuddin won from the Moradabad constituency of Uttar Pradesh to the Lok Sabha, the lower house of the Parliament of India. In Oct 2010, Sri Lankan Muttiah Muralitharan called him one of the best players in cricket on par with Sachin Tendulkar. 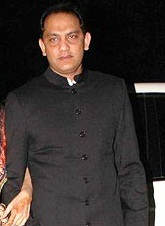 image credit
Mohammad Azharuddin by filmitadka.in, is licensed under cc-by-sa-3.0, resized from the original.