Matthew William Sorum (born November 19, 1960) is an American drummer and percussionist. He is best known as both a former member of the hard rock band Guns N' Roses, with whom he recorded three studio albums, and as a member of the supergroup Velvet Revolver. Sorum is currently a member of the touring project, Kings of Chaos, and is a former member of both The Cult and Y Kant Tori Read. Sorum was also a member of Guns N' Roses side-projects, Slash's Snakepit and Neurotic Outsiders, and released a solo album, Hollywood Zen, in 2004. After performing on synthpop band Y Kant Tori Read's sole album, Sorum joined The Cult in 1989 to tour in support of their fourth studio album, Sonic Temple (1989). During the tour, Sorum was spotted by Guns N' Roses guitarist Slash and subsequently replaced their drummer Steven Adler in 1990. Remaining in the band for seven years, Sorum recorded the albums, Use Your Illusion I (1991), Use Your Illusion II (1991), and "The Spaghetti Incident?" (1993), before departing in 1997 following an argument with frontman Axl Rose. In 2001, Sorum rejoined The Cult to perform on their reunion album, Beyond Good and Evil (2001), and its subsequent tour and subsequently co-founded the hard rock supergroup Velvet Revolver, alongside former Guns N' Roses bandmates, Slash and Duff McKagan. The band, which also included guitarist Dave Kushner and Stone Temple Pilots frontman Scott Weiland, released two successful studio albums, Contraband (2004) and Libertad (2007), before entering an extended hiatus following Weiland's departure. Sorum has been a permanent member of hard rock cover band Camp Freddy since 2003, alongside Jane's Addiction members Dave Navarro and Chris Chaney, and assisted in hosting its radio show and podcast on Indie 103.1. In 2012, Sorum founded a touring project, entitled Kings of Chaos, featuring members of Guns N' Roses, Deep Purple, Def Leppard, Aerosmith, ZZ Top, Cheap Trick and Slipknot. In 2012, Sorum was inducted into the Rock and Roll Hall of Fame as a member of Guns N' Roses.On October 12, 2013 Matt married his longtime girlfriend Ace Harper in Palm Springs, California. 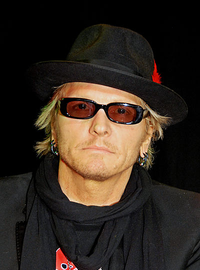 image credit
Matt Sorum by Glenn Francis, is licensed under cc-by-sa-3.0, resized from the original.