Sheena Easton (born Sheena Shirley Orr; 27 April 1959) is a Scottish/American international recording artist and stage and TV/film actress. Easton first came into the public eye as the focus of an episode in the first British reality television programme The Big Time: Pop Singer, which recorded her attempts to gain a record contract and her eventual signing with EMI Records.In the UK, Easton became the third UK female solo artist ever to top the US Hot 100, following Petula Clark, and Lulu. Reid and Babyface, Patrice Rushen, and Nile Rodgers. 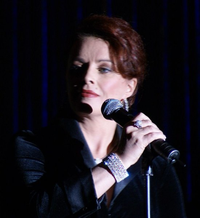 image credit
Sheena Easton by djnaquin67, is licensed under cc-by-sa-2.0, resized from the original.