Walter Adrián Luján Samuel (Spanish pronunciation: [ˈwalter saˈmwel]; born Walter Adrián Luján; 23 March 1978) is a retired Argentine professional footballer. Gifted with natural power and good defensive skills, Samuel has been regarded as one of the best centre-backs of his generation, and as one of football's toughest defenders, with former international teammate and Inter captain Javier Zanetti referring to him as the "hardest player" he has played with. Samuel began his club career with domestic club Newell's Old Boys in 1996, later moving to Boca Juniors the following year. This was soon followed by a move to Europe in 2000, and spells with Italian club Roma, and Spanish club Real Madrid. In 2005, he returned to Italy, joining Inter, where he remained for nine seasons, winning five consecutive Serie A titles; he played a key role in the club's treble success in the 2009–10 season, partnering with Lúcio in defence under José Mourinho. At international level, he has accumulated over 50 caps for the Argentine national team, representing his country at two FIFA World Cups, the 1999 Copa América, and the 2005 FIFA Confederations Cup, where he won a runners-up medal. 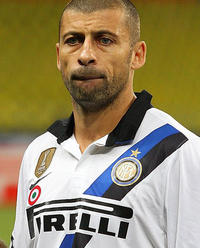 image credit
Walter Samuel by http://www.soccer.ru/gallery/45191, is licensed under cc-by-sa-3.0, resized from the original.