Thierry Lhermitte (French pronunciation: ​[tjɛʁi lɛʁˈmit]; born 24 November 1952) is a French actor, director, writer and producer, best known for his comedic roles. He was a founder of the comedy troupe Le Splendid in the 1970s, along with, among others, Christian Clavier, Gérard Jugnot, and Michel Blanc. That group adapted a number of its stage hits for the cinema, and scored major successes with films such as Les bronzés (1978), Les bronzés font du ski (1979), Le Père Noël est une ordure (1982) and Un indien dans la ville (1994). 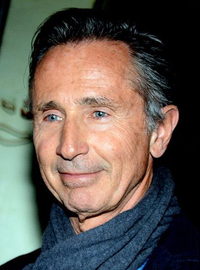 image credit
Thierry Lhermitte by Georges Biard, is licensed under cc-by-sa-3.0, resized from the original.