Norman Frederick Jewison, CC, O.Ont (born July 21, 1926) is a Canadian film director, producer, actor and founder of the Canadian Film Centre. Highlights of his directing career include The Cincinnati Kid (1965), The Russians Are Coming, the Russians Are Coming (1966), In the Heat of the Night (1967), The Thomas Crown Affair (1968), Fiddler on the Roof (1971), Jesus Christ Superstar (1973), F.I.S.T (1978), ...And Justice for All (1979), Moonstruck (1987), Other People's Money (1991), The Hurricane (1999) and The Statement (2003). Jewison has addressed important social and political issues throughout his directing and producing career, often making controversial or complicated subjects accessible to mainstream audiences. 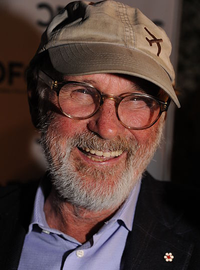 image credit
Norman Jewison by Canadian Film Centre /, is licensed under cc-by-2.0, resized from the original.