Mark Allen Brunell (born September 17, 1970) is an American football coach and former quarterback who is the current head coach at the Episcopal School of Jacksonville. He was selected by the Green Bay Packers in the fifth round of the 1993 NFL Draft. He played college football at Washington. Brunell was a three-time Pro Bowl selection with the Jacksonville Jaguars. He has also played for the Washington Redskins, New Orleans Saints, and New York Jets. In 2009, he earned a Super Bowl ring as the backup quarterback and holder for the Saints' Super Bowl XLIV winning team against the Indianapolis Colts. 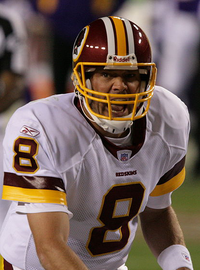 image credit
Mark Brunell by Keith Allison, is licensed under cc-by-sa-2.0, resized from the original.