Marion Elise Ravn (born 25 May 1984), known as Marion Raven, is a Norwegian singer-songwriter. She was one-half of the now defunct pop duo M2M, along with Marit Larsen. Raven was later signed as a solo artist by Atlantic Records with the release of her solo debut album, Here I Am in 2005. In 2006, Raven was signed to the indie record label, Eleven Seven, and re-released her debut album with a few new songs, Set Me Free, in 2007. In 2012, Raven began production of her second album titled Songs from a Blackbird, which was released in her home country, Norway on April 8, 2013.Raven has also written tracks for other artists such as Pixie Lott. She has also lent her voice for the Norwegian version of Tangled.In 2013 on her 29th birthday, Raven married long time boyfriend, professional snowboarder Andreas Wiig. 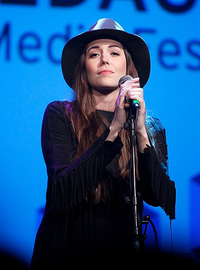 image credit
Marion Raven by Eirik Helland Urke, is licensed under cc-by-sa-2.0, resized from the original.