Louise Brooks (November 14, 1906 – August 8, 1985), born Mary Louise Brooks, was an American dancer and actress, noted for popularizing the bobbed haircut.Brooks is best known as the lead in three feature films made in Europe, including two G. W. Pabst films: Pandora's Box (1929), Diary of a Lost Girl (1929), and Prix de Beauté (Miss Europe, 1930). She starred in seventeen silent films and eight sound films before retiring in 1935. Brooks published her memoir, Lulu in Hollywood, in 1982; three years later she died of a heart attack at the age of 78. 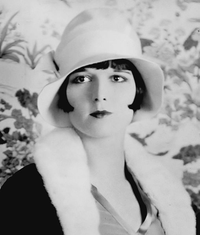