Isaac K. Brock (born July 9, 1975) is the lead singer, guitarist, banjoist, and songwriter for the American indie rock band, Modest Mouse, as well as his side project band, Ugly Casanova. As a songwriter he is noted for wordplay and frequent use of metaphors, philosophical lyrics, themes of oppressive rural lifestyles, and certain phrases and sayings commonly used in the early to mid-20th century and in blue collar environments. 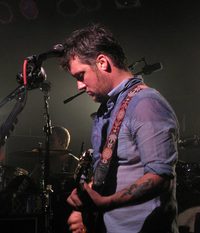