Bret Peter Tarrant McKenzie, ONZM (born 29 June 1976) is a New Zealand comedian, actor, musician and producer, best known for being one half of the Grammy Award winning musical comedy duo Flight of the Conchords along with Jemaine Clement. McKenzie served as music supervisor for two Muppet films, The Muppets (2011) and Muppets Most Wanted (2014), the former of which won him an Academy Award for Best Original Song for the song "Man or Muppet".As an actor, he is known for portraying two different characters in Peter Jackson's The Lord of the Rings and The Hobbit film trilogies, respectively: in the first he portrays Figwit, a character originally cast as an extra who gained attention thanks to the trilogy's Fan Community, and in The Hobbit portrays Lindir, a small character who originally appears in The Fellowship of the Ring book. 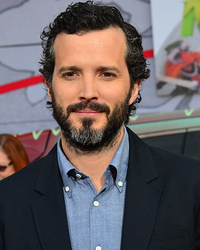 image credit
Bret McKenzie by Mingle Media TV, is licensed under cc-by-sa-2.0, resized from the original.